YAHNA KAIELA ARTS – Events October to December 2019 “We want to walk with you -We don’t want to walk  alone.” Pastor Sir Doug Nicholls With the final quarter of […]

Save the date NAIDOC WEEK at Kaiela Arts.

Spacecraft Studio and Kaiela Arts work together on projects to introduce emerging Indigenous artists from Shepparton and Mooroopna in the north east of Victoria to screen printing technologies and professional art practices.

FOOTPRINTS IN THE SAND

This exhibition is about sharing some of our local history and stories about when our Ancestors walked off Cummeragunja mission in 1939.

Are you an Aboriginal woman who dreams about starting or growing a business?

Learn how to read a story told using ancient Aboriginal signs and symbols.

Join with fibre weavers from Kaiela Arts for an introduction to coil weaving in the cool tranquillity of the evening.

‘MY BOOMERANG WON’T COME BACK!’ WITH JACK ANSELMI IN PARTNERSHIP WITH RIVER CONNECT AND SHEPPARTON FESTIVAL

Come and find out about the different designs and purposes for a boomerang.

Come in and buy a masterpiece!

The third iteration of Kaiela Arts Design Roots project – H’Art of Rhythm will present an array of new works by Kaiela Arts artists in response to the theme of Rhythm and Heart. We will also present two new screen printed fabric designs at this exhibition.

Its Christmas! and to celebrate, Kaiela Arts is making Christmas decorations, Koorie Style!

IN THE FOOTSTEPS OF THANCOUPIE – CERAMIC ARTIST & STORY TELLER

Barb and Judith will inform participants about different indigo dyeing techniques and each participant will make their own sample piece.

Experience the culture of beads as an installation of a dazzling, inspired frenzy of creativity during this exhibition at Kaiela Arts.

YALKA LOTJPA NHA IS A COLLABORATIVE BOOK WRITING AND ANIMATION PROJECT THAT BEGAN IN 2017. IT IS COLLABORATION BETWEEN WRITERS AND ARTISTS FROM KAIELA ARTS. EXPERIENCE THE CULTURE OF BEADS AS AN INSTALLATION OF A DAZZLING, INSPIRED FRENZY OF CREATIVITY DURING THIS EXHIBITION AT KAIELA ARTS.

Learn the techniques of painting with Acrylic & Sand on Canvas.

Experience the culture of beads as an installation of a dazzling, inspired frenzy of creativity during this exhibition at Kaiela Arts.

Come and share afternoon tea at Kaiela Arts as a welcome to visiting Aboriginal artists who are in Shepparton for the Ceramic Award.

Explore the wonders of needle felting to obtain detail within the felting medium.

It is our second year of presenting at this important Industry fair alongside Aboriginal Art centres from all over Australia.

Using the image of Connecting Waters by Troy Firebrace.

PAINTING FOR WOMEN – EXPRESSING YOURSELF AUTHENTICALLY

A Workshop for Women in the studio to discuss painting styles and subject matter.

Auntie Girl is a project inspired by the 2018 NAIDOC theme Because of Her we Can.

This project is designed to uncover practitioners of traditional cultural beading skills of the many cultural groups who live within the Goulburn Valley Region.

Join Kaiela Arts in Melbourne for National Reconciliation Week - 27 May to 3 June 2018.

Hiroko Suzuki was born in Japan and lived in Australia for ten years and will share techniques of working with paper to make beads that will contribute to a large sculptural artwork.

Glass beads to dazzle and delight you – learn how, and participate in Beads of Culture - Tuesday 8, 15, 22 May

PERFECTLY IMPERFECT- AN EXHIBITION OF NEW WORKS BY SUZANNE ATKINSON

An Exhibition of New Works by Suzanne Atkinson. The works that you will expect will range from woven baskets, jewellery, vases, placemats and coasters, landscape and portrait paintings, ceramics and poetry.

The Darwin Aboriginal Art Fair (DAAF) provides a genuine opportunity for buyers, collectors and galleries to purchase artwork directly, from over sixty Indigenous owned community Art Centres, whilst being immersed in an exciting program of traditional dance, workshops, film, fashion and music!

This year we are kicking off the three month Turtle Making Extravaganza with a special school holiday activity launch, with Turtle games, stories and also clay Turtle making workshops all day for everyone.

Come along and create some contemporary expressions of an age old tradition - Wednesday March 21, 28, & 18 April

Learn how to read a story told using ancient Aboriginal signs and symbols then create your own visual language and leave a message in the earth - In partnership with River Connect and SheppARTon Festival.

Join with fibre weavers from Kaiela Arts for an introduction to coil weaving in the cool tranquillity of the evening - In partnership with River Connect and SheppARTon Festival .

MY BOOMERANG WON’T COME BACK! WITH JACK ANSELMI

Do all Boomerangs come back? Come and find out about the different designs and purposes for a boomerang - In partnership with River Connect and SheppARTon Festival

Starting a new year on the right foot is desirable and this session is to look at changes and development in contractual arrangements between Kaiela member artists and Kaiela Arts as their representative Art Centre.

Join us at Kaiela Arts as experienced portrait artist, Glenda Cornell teaches you how to draw and paint a portrait using a live model.

Women and men from Goulbourn Valley Region communities will come together in a series of hands on workshops to share, rediscover and reinterpret traditional bead making, sewing, threading and use.

This exhibition will present the natural life of Victoria Lake, Shepparton, with a focus on the birds and plants that live on and around the lake.

Join local ceramicists and Kaiela Arts artists, Angie Russi as she teaches you how to spin the pottery wheel and make beautiful pots for your home or garden.

Phoenix will showcase the great artworks from the women of the Phoenix workshops.

Come and make a Turtle from cardboard with movable legs that can be coloured in and decorated using cross hatching methods that reference local cultural mark making.

Bring the kids to Kaiela Arts on the school holidays as we teach them how to make a turtle out of clay and about the Turtle as a totem.

Come along and make a clay tile with Kaiela Artist Ken Hovenden while he tells you a story about Dunatpan (Rainbow Serpent).

Come and help tell the story about the Dunatpan (Rainbow Serpent) in our big sand pit with the artists of Kaiela Arts.

Join us at Kaiela Arts as we teach you how to draw and paint a portrait with experienced portrait artist, Glenda Cornell.

Living Stories of the Dungala Kaiela is the culmination of a twelve month collaborative project with Elders, Artists and Language specialists to develop, produce and publish a children’s book /DVD […] 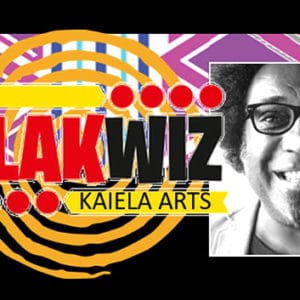 BlakWiz Kaiela Arts Gallery Kaiela is rebranding to our new name, Kaiela Arts. To celebrate, our artists at Kaiela Arts have written and developed in collaboration with comedian Jason Tamiru a onetime only hilarious […]

In celebration of its 10th year Kaiela Arts is proud to launch DESIGN ROOTS, a 3 year Indigenous merchandising initiative. DESIGN ROOTS 2 and 3 will take place in 2017 […]

Kaiela Arts artist Eva Ponting will lead you on a journey of discovery through weaving.

Vessels of Life is an installation artwork created by Naomi Ota, Eva Ponting, Aunty Cynthia Hardie and Lyn Thorpe. It was initially developed and made for Collisions: Cross-Cultural Collaborations; a […]

Our local Aboriginal culture and artists were warmly celebrated by members of the community, who came together at the opening of the ‘Strong Spirit’ exhibition on Thursday, March 3, 2016. […]

Collisions: Cross-Cultural Collaborations is a community cultural development partnership between SAM and Gallery Kaiela that provided an opportunity for artists from a diverse range of backgrounds to come together and […]